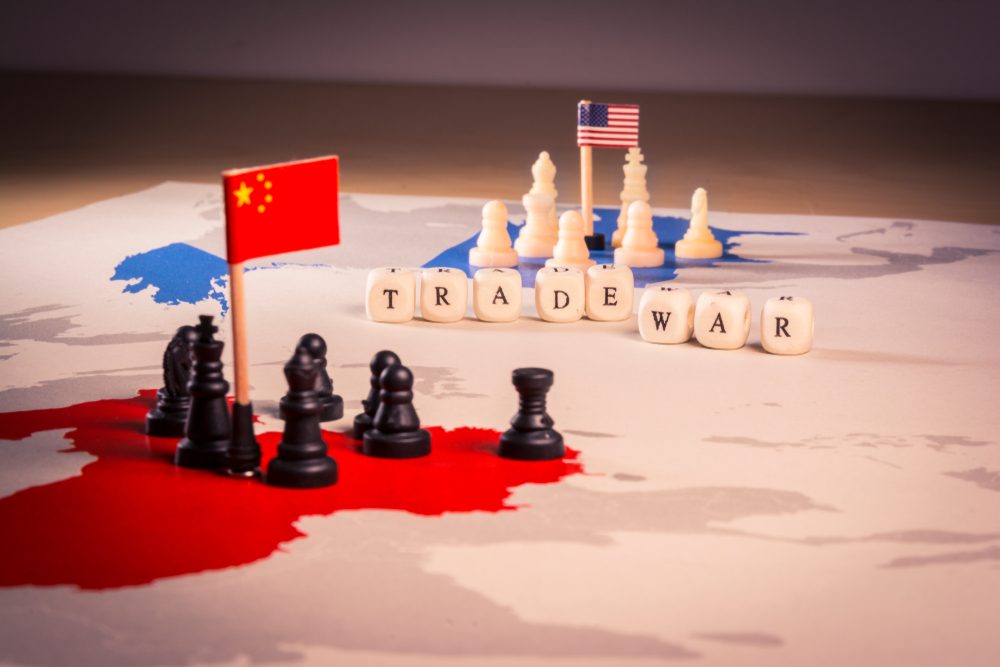 The US and China escalated their ongoing trade war yesterday, with both countries implementing 25% tariffs on $16 billion of imports. The move brings the total amount levied to $100 billion since July. China’s new tariffs came into play yesterday – the day that the US said it would start collecting extra duties in retaliation for China’s ‘unfair trade practices’. It appears that fears of a tit-for-tat battle between the two superpowers are becoming realised.

While Chinese and US officials are due to meet soon, there is little hope of a breakthrough being made; Donald Trump told Reuters that he didn’t ‘anticipate much’ from the negotiations. The news made markets nervous and, coupled the troubles that Trump is currently facing, investors remain jittery.

Elsewhere, minutes from the European Central Bank monetary policy accounts meeting showed that an interest rate rise could happen in September 2019. The ECB also declared that the two biggest threats to the eurozone’s economy are the threat of a global trade war and increased protectionism.

Today we have the final reading of the German GDP growth rate for the second quarter of 2018, as well as UK finance mortgage approvals and July’s durable goods orders in the US. Before those figures are released, why not take a look at a recent case study we published? It details the work we have done with The Collective and how we helped them hedge their exposure, acquire certainty and make some money at the same time.

If you haven’t yet hedged your company’s foreign currency exposure, then get in touch with us to see how we can help. HSBC recently launched a risk management survey report which found that 70% of CFOs say they experienced lower earnings due to significant unhedged FX risk in the past two years – be one of the 30% who manages risk effectively.

We’ll be closed this Monday as it’s a Bank Holiday, but we’ll be back bright and early on Tuesday.

GBP: Raab wants the UK to have continuity

It was another quiet day in the UK for economic data, with the CBI distributive trades survey the only release on the schedule. The survey showed strength in the high street, with a positive balance of 29 in August against an expectation of 13. It had been expected to dip from 20 the previous month, but actually climbed higher. However, the expected employment index fell to -35 in August, which is the lowest level since the fourth quarter of 2009.

Elsewhere, Brexit secretary Dominic Raab delivered a speech in which he said the UK might want as much continuity as possible in the event of a no-deal Brexit. It is currently unclear how withdrawing from hundreds upon hundreds of international treaties can have very little effect on UK operations, but Raab’s optimism is to be commended. He did say that he believed the UK will be better off outside the EU in the long term, but there could well be challenges in the short term. The pound soon started weakening against the dollar and fell back below the $1.29 level it breached on Tuesday.

Today we have the UK finance mortgage approvals which are expected to climb a little in July from the previous month.

It was an extremely busy day for the eurozone yesterday, with a raft of PMI data on the schedule. Germany’s services PMI climbed to 55.2 in August from 54.1 the month before and above expectations of 54.3. It is the strongest expansion in the services sector since February, mainly because of sharp increases in new orders.

However, the picture was less rosy elsewhere, as the manufacturing sector slipped from 56.9 to 56.1, which was below expectations of 56.5. It is the second-lowest reading for 20 months. Although the reading was disappointing, the German economy appears to extremely resilient and has gone some way to dispelling fears of a global trade slowdown. The eurozone’s PMI releases weren’t too far from expectations, with composite, manufacturing and services coming in at 54.4, 54.6 and 54.4 respectively.

The main release of the day was the ECB’s monetary policy meeting accounts, which were closely watched for indications of future policy. The minutes revealed that there could be an interest rate rise in September 2019, while the main risks for the eurozone’s economy are said to be the threat of a global trade war and increased protectionism.

Following Wednesday evening’s FOMC meeting minutes release, the dollar lost some ground against sterling and the euro, but it bounced back yesterday as the news filtered through to the markets. The move represented the first rallying in six trading sessions, as it is now widely expected we will see further interest rate rises before the year is out.

The ongoing trade war between the US and China didn’t hurt the dollar either, as the greenback is seen as safe haven and investors piled into it. The main release from the US was new home sales for July, which came in at the lowest rate since October. Sales shrank by 1.7% from the previous month. We also saw composite, manufacturing and services PMI, which came in at 55, 54.5 and 55.2 respectively. All were slightly below expectations, but the figures still show healthy growth.

Today we will see durable goods orders for July and the Jackson Hole economic policy symposium is set to begin at 3pm.