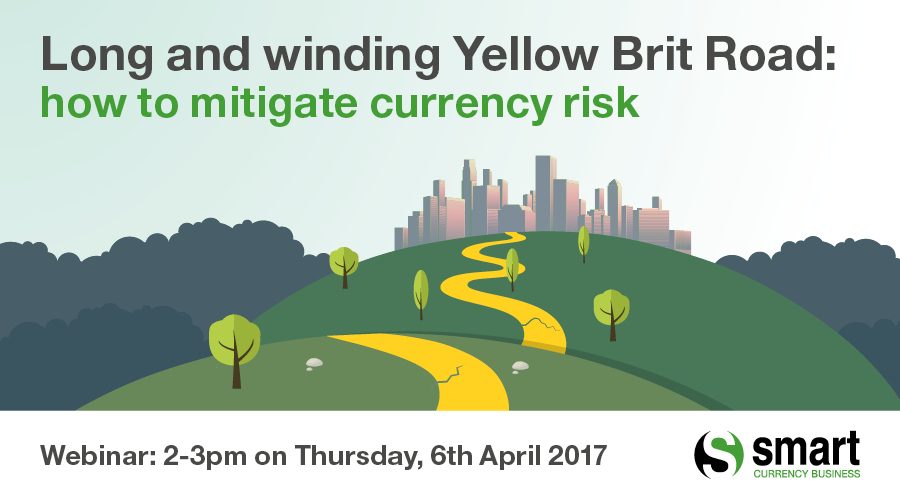 At 2 pm this afternoon, our currency risk management specialists Jamie Jemmeson and Harry Narenthira will be looking at what’s been happening in the currency markets since Prime Minister Theresa May triggered Article 50 on 29th March.

They’ll also be discussing where volatility is likely to come from going forward and what that means for UK businesses. Quickly grab one of our last few places: register for the webinar!

Back to pound, euro and dollar movements:

Following the disappointing purchasing managers’ index data sets for manufacturing and construction, all eyes were on the services PMI figures yesterday.

The service sector is the largest in the UK, accounting for roughly 70% of economic activity. The data showed that the services sector had grown faster than expected and the figure was up from the previous month.

However, it wasn’t all good news. The figures also showed that due to cost pressures, prices had risen at the fastest pace since late 2008.

As a result of the positive news though, we saw sterling rise against the dollar by 0.3% yesterday. Given the weighting of the services sector, this was a relatively modest gain, especially when we take into account the slide we saw on the back of the manufacturing and construction PMIs.

Meanwhile, the European parliament backed a motion setting out its position for the upcoming Brexit negotiations by 516 to 133.

MEPs will not be directly involved in the Brexit negotiations. They will, however, vote on the final deal. What was agreed by MEPs yesterday was the need for a phased approach, settling financial commitments before talks on future relationships can start. The UK is considered liable for financial obligations that apply after the country leaves the EU.

Today is going to be quiet on the data front. Any further Brexit updates could have an effect on the currency.

It was mixed fortunes for the service sector in the Eurozone. The French and Italian services sectors missed forecasts, whilst the Spanish and German data exceeded expectations. Markets, however, generally focus more on the composite figure than the individual nations’ figures. The composite figure posted a reading of 56.4 (anything above 50 indicates growth). This is at a six-year high.

Meanwhile, there was a lot of discussion surrounding the second live presidential debate in France on Tuesday. For the first time, all 11 candidates in the French presidential election went head-to-head in a televised debate. According to Bloomberg, two snap polls rated far-right Le Pen’s performance as only the fourth best on the night.

However, yesterday Opinionway polls suggested that Le Pen was closing the gap.

Once again we saw European Central Bank members discussing monetary policy yesterday, which is a further sign that we are seeing a normalisation in the European economy. Two ECB members talked about the timing of QE tapering. One of them said it would start soon and the other one said in summer.

In terms of data, markets will focus on German factory orders today.

USD: Fed and US-China summit weigh on US dollar

The US dollar has seen some moderate weakness following the Federal Reserve minutes, released last night, and in anticipation of the forthcoming US-China summit.

The markets were left disappointed by the lack of detail in the Fed’s minutes with regards to the discussion on reducing the central bank’s balance sheet.

Yesterday, prior to the central bank’s release, US stocks rose to a two-week high and the S&P 500 advanced after ADP Research Institute data showed a surge in payroll numbers last month. The US dollar followed suit and gained against a basket of currencies. In other news, 10-year treasury notes increased less than one point to 2.37%.

Markets today are firmly focused on the US-China summit and the US non-farm payrolls, which are due out this Friday.