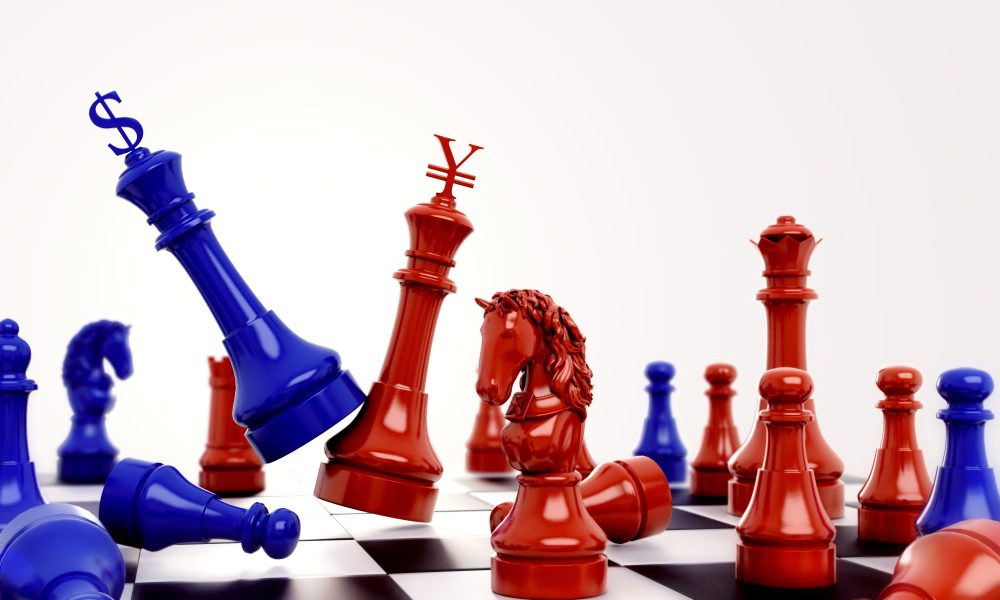 The trade war between the US and China officially began on Friday, as Trump imposed 25% tariffs on $34 billion of Chinese imports. The tariffs came into effect at midnight East Coast time, which was as expected. More than 800 Chinese products are affected, including aerospace, robotics and industrial machinery. It is expected that a further $16 billion of Chinese goods will have tariffs placed on them within the next couple of weeks.

China hit back almost immediately with tariffs on $34 billion of US imports, including soya beans, electric vehicles and pork. There are fears that this could significantly impact on America’s agricultural base. Worryingly, Trump told reporters that if China retaliated then the US could impose a second wave of $200 billion of imports, with another wave of $300 billion after that.

The figures are staggering and China accused the United States of starting ‘the biggest trade war in economic history’. It is difficult to see how Trump’s actions won’t hurt the global economy in the coming weeks and months; 25% is an enormous amount when you think about it and a range of sectors will be hit, as well as consumers. Remarkably, Asian markets rose on the back of the news, in what might be a sign that traders are relieved that the waiting is finally over.

In the UK, Airbus CEO, Tom Enders, told reporters that Theresa May’s administration doesn’t have a clue how to execute Brexit without causing severe harm. The stinging attack on the government smacked of a desperate attempt to prevent a hard Brexit and you have to wonder what Conservative MP Owen Paterson would make of it. He claimed on Thursday that Jaguar Land Rover would be in a ‘wonderful position’ once the UK has left the single market, which is an opinion that is currently at odds with that of Jaguar Land Rover, Airbus, BMW, Deutsche Bank, BP, Nestle, Vodafone, Chubb, Rolls-Royce, Nissan and JP Morgan.

On the economic data front, the Halifax house price index came in as expected, but UK labour productivity decreased by 0.4% in the first quarter of 2018. It is the first quarterly fall in output since the second quarter of 2017. In Germany, industrial production figures for May smashed forecast by growing at 2.6% from -1.3% the month before. The figure had been expected to hit 0.3% so the release was particularly encouraging.

In the US, non-farm payrolls showed that 213,000 new jobs were created in June, which was quite a bit better than the 195,000 forecasted. May’s figure was revised higher from 223,000 to 244,000 which shows just how robust America’s job creation is at present. However, the jobs market might just be starting to level out, as the US employment rate surprisingly rose to 4% from 3.8% the month before. It is worth adding that this was for good reasons, as the labour force grew; more people are therefore looking for work.

We’re currently working on our latest currency forecasts, so while you wait for those to be completed, why not take a look at our treasury management white paper? It provides a broad overview of some of the things to consider if you’re a business with dealings in foreign currency. We’re also working on a new business services document that serves to highlight how our expertise goes beyond merely being risk management experts. So, much to look forward to in the near future.

Finally, we learned that David Davis has resigned as Brexit secretary just eight months before the UK is set to leave the EU. He claimed he could not support May with her vision of Brexit and it is fresh turmoil for the UK government. We’ll have more details in tomorrow’s currency note.

Following comments made by the CEO of Jaguar Land Rover last week, on Friday, the CEO of Airbus gave a talk in which he heavily criticised Theresa May’s administration for what he sees as their inability to properly execute Brexit without causing severe harm. The talk happened as May was at Chequers with ministers, trying to thrash out the impossible: a Brexit deal that is accepted by the EU, whilst simultaneously pleasing, remainers, soft Brexiteers and hard Brexiteers.

Sterling managed to make some gains against the dollar, although last week’s trading was within a pretty tight range. The question is when will the next big move come and, when it does, in which direction will it be? It would not be a surprise to see some significant sterling weakness if the UK heads towards a Brexit deal that takes us out of the single market, but it is known that May would prefer to have access. We learned early this morning that David Davis has resigned as Brexit secretary, just eight months before the UK is set to leave the EU. We’ll have more details tomorrow.

The Halifax house price index showed an increase of 1.8% year-on-year in the three months to June 2018 which was in line with expectations. There was some disappointment as labour productivity in the first quarter of 2018 shrank by 0.4%. The release is particularly worrying, because when productivity increases, we tend to see a greater increase in pay but, with wages growing at a pitiful rate since the financial crisis, the loss of productivity could exacerbate the problem.

There are no economic data releases from the UK today, but we could well see some further Brexit-related news throughout the week.

The only release of note from across the eurozone on Friday was the German industrial production figures which were extremely impressive. In April, productive shrank by 1.3% and the following month it had been expected to have picked up to 0.3% growth. However, the release actually showed industrial production increased by a whopping 2.6%.

It is the steepest increase in production since November last year and Germany has shown quite the turnaround of late. Trump’s trade tariffs have had a negative impact on German business confidence, but recent releases have put paid to that for now. The euro strengthened against sterling and the dollar following the release to post a fine end to the week for the single currency.

Today we will see the balance of trade from Germany in May. There was a trade surplus of €20.4 billion last month so it will be interesting to see whether this has widened or narrowed.

USD: trade war begins against a backdrop of positive data

On Friday, the trade war between the US and China finally began as Trump’s trade tariffs finally came into effect. China retaliated almost immediately to essentially nullify the effects of the tariffs – at least theoretically. In actual fact, many sectors on both sides will suffer as a result of the tariffs and, while China said it didn’t want a trade war, it is easy to understand why they can hardly sit back and do nothing.

Non-farm payrolls in June showed that 213,000 jobs were created against a forecast of 195,000. The US jobs market has shown repeated strength and although unemployment surprisingly went up from 3.8% to 4%, this was because the labour market increased so more people were always going to be looking for employment.

However, average hourly earnings only rose by 0.2% which keeps annual earnings growth at 2.7%. This is below expectations of 2.8% and suggests there is not much wage inflation in America. Obviously, this is bad news for workers, but it might stop the Federal Reserve from increasing interest rates as aggressively as previously thought. Perhaps this explained why the dollar fell back a little on Friday.

Like the UK, it is quiet for economic data in the US today, but fallout from the trade war will likely dominate the headlines for some time to come yet. The hope is that Trump will not go ahead with his proposed $500 billion of extra tariffs because then we would certainly be in a full blown trade war.