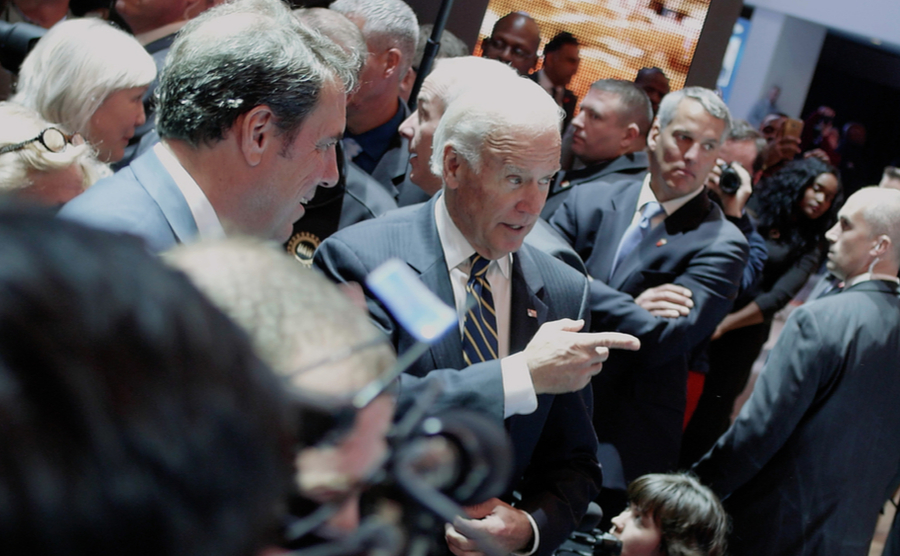 President Biden at Detroit Motor Show, but can he engineer a weaker dollar to help US industry? (AA_PRODUCTIONS / Shutterstock.com)

Sterling weakened across the board yesterday as positive vaccine and lower infection data begins to be priced in.

The dollar strengthened across all major currencies, something that will not please President Biden as his team aim to bolster American manufacturing with a weakened dollar and are reportedly seeking ways to achieve that.

In business news, the ratings website Trustpilot announced plans to list on London’s stock market, and share markets bounced back after worries about inflation sent shares tumbling and bringing GBP with them last week.

Chancellor Rishi Sunak will be preparing to present his Budget at 12.30 tomorrow, and will have been hearing calls for higher taxes – or lower taxes – from various quarters.

It’s a busy midweek for data and there could be significant market movements.

Sterling rallied early yesterday in response to positive data across the board (including mortgage lending, manufacturing PMI and lower credit card bills), but then declined through the rest of the day ending slightly below where it started.

The boost from being the fastest mover in Europe on vaccines appears to be played out and now needs to be followed by a rapidly recovering economy.

This morning UK house prices were revealed to have risen by 6.9% through the pandemic year according to data from Nationwide.

There are no other big data releases until the Budget tomorrow lunchtime.

The single currency weakened by around 0.5% against USD yesterday amid the frustratingly slow vaccine rollout and rising Covid cases in several of the EU’s major economies, including Germany.

Other than that the data from within the EU was broadly positive, including fractionally better than expected PMI data across the board.

This morning we have already seen retail sales shrinking by 8.7% in Germany year-on-year – far worse than forecasts of a small rise – and we have plenty more high level data to go as the day progresses, including unemployment and inflation in Germany and the eurozone respectively.

The US dollar had a positive day yesterday, strengthening against almost all major currencies, especially those based on commodities.

The dollar is continuing to benefit from the $1.9trillion stimulus package being passed last week as the economy begins to reopen, with almost a quarter of the population vaccinated and new Covid-19 cases down 21% over the past fortnight.

It was also revealed that states have fared better for tax revenue than expected over the past year, collecting almost as much in 2020 as in 2019, depending on how you count it.

There is little on the docket today, but plenty for the markets to chew on tomorrow, including Markit PMI and various speeches by Fed Reserve MPC members.