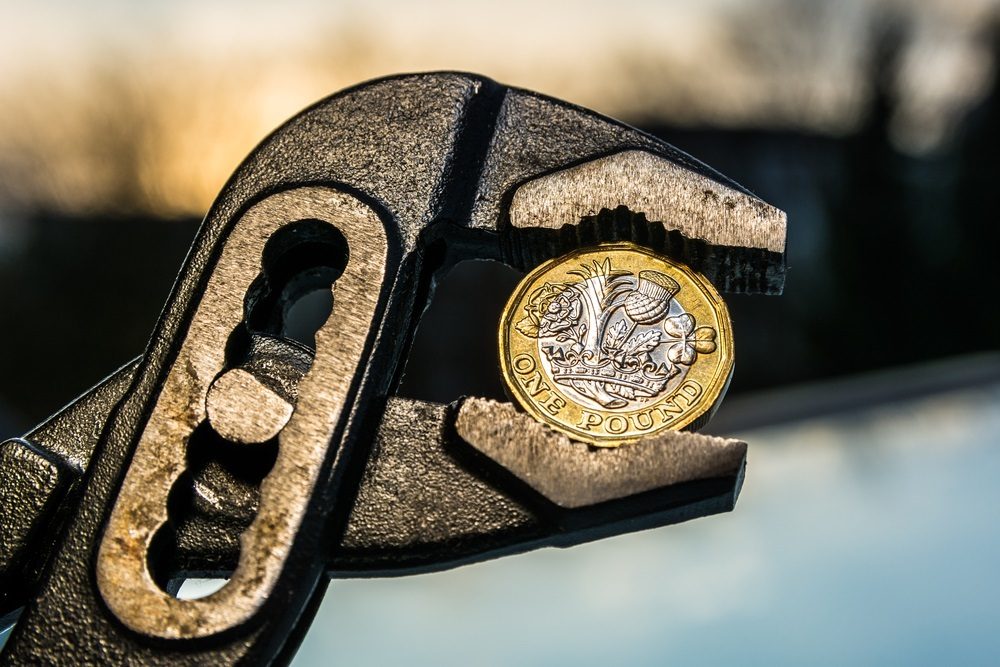 Sterling began the week by weakening against the euro and dollar as political uncertainty continues to exert pressure on the pound. It started the day by making some small gains before dropping to its lowest level against the dollar since the end of October. It did manage to bounce back off the lows, but it is clear that concerns are growing over the meaningful vote on Theresa May’s Brexit proposals; investors fear the bill won’t get through parliamentary approval on 11 December.

The British prime minister said she would still be in her job in a fortnight, which was no doubt an attempt to end speculation that she would resign if Parliament rejects her proposals. It is widely expected that the bill will be rejected the first time around, so the real question is whether the margin of victory for those opposed will be slight or more pronounced. If there is a landslide vote against it, then May’s bill will be dead in the water.

With several possibilities over the meaningful vote, yesterday we published our Brexit Scenario Analysis document, where we outline the different possible scenarios and what we expect to happen to the pound within each of them. The message is clear: do not leave it too late to hedge your foreign exchange, as large adverse moves could have a significant impact on your profits, margins and budgets. Our team can provide guidance on some of the way to navigate the uncertainty.

Wall Street rallied on reports that there has been a breakthrough in the trade war between the US and China. Trump hailed what he called a BIG leap forward, saying that the trade truce can be a win for both sides of the negotiations. Washington has agreed to postpone the increase in tariffs from 10% to 25% by 90 days, while China has said it will import more US products. This will likely narrow the US trade deficit with China and, while the announcements so far only signal temporary relief from the trade war, they do buy both sides more time to negotiate.

The UK manufacturing PMI jumped to 53.1 in November from 51.1 in October, which was some way above the 51.5 the markets had been expecting. The majority of the increase in demand came from domestic customers, who are rushing to stockpile important products and components in case of trade disruptions after Brexit.

It is worth noting that new orders from overseas shrank for the second consecutive month, which is the first time this has happened since November 2016. In addition, the latest manufacturing PMI reading is still among the weakest registered over the past two-and-a-half years. While growth is still forecasted for the year ahead, the confidence of UK manufacturers is now at its lowest since August 2016.

Today we will see the construction PMI reading for November, which is expected to dip a little to 52.5 from 53.2 the previous month. Bank of England governor, Mark Carney, is also set to give a speech this morning.

The only releases of note from the eurozone yesterday were the manufacturing PMI readings from Germany and the eurozone. Both were revised upwards to 51.8 in November 2018 from preliminary readings of 51.6 and 51.5 respectively. Still, both figures will still be some cause for consternation, with Germany’s pointing to the slowest growth in the manufacturing sector for 31 months.

The eurozone’s reading showed the weakest growth in the manufacturing sector since August 2016. In addition, Germany’s figures marked the tenth time PMI has fallen in 2018 alone. New orders fell by the most in four years and new export orders shrank by the most since June 2013. All in all, it was not a great day for the manufacturing sector and it will be helped that talks of a trade war breakthrough between the US and China will benefit Europe sooner rather than later.

Still, the euro had a decent day against sterling and the dollar, although it has quite a bit of ground to make up against the greenback before rooftops can be shouted from. Nothing of note on the economic data schedule today really, but tomorrow we have composite and services PMI from Germany and the eurozone, as well October’s retail sales figures from the euro area.

On Saturday night, Trump held talks with Xi Jinping and it looks as if there has been a trade war truce for the time being. The president Tweeted several times throughout yesterday, with one social media posting stating that farmers would be a very BIG and FAST beneficiary of the negotiated deal.

Wall Street rallied in response, as the Dow Jones industrial average jumped by 412 points in early trading. The S&P index started the day up by 1.5%, with the Nasdaq gaining 2%. Investors around the globe appear to be feeling much better about the situation, especially given Trump’s previous comments that he doubted a breakthrough could be made.

In a nutshell, the truce means that the US will delay imposing tougher tariffs on Chinese imports for 90 days, while China will import more from the US. The picture will certainly be clearer in three months’ time, but the news is certainly being received positively for now.

November’s Markit manufacturing PMI in the US came in at 55.3 which was ever-so-slightly below the 55.4 expected, while the ISM manufacturing reading climbed to 59.3 last month from 57.7 in October. This was better than expectations of 57.7 and further confirmation that the US economy is in fine fettle. There’s nothing of note on the schedule today, so attention will be directed on any further Brexit developments (or lack of), as well as the stock market’s performance.