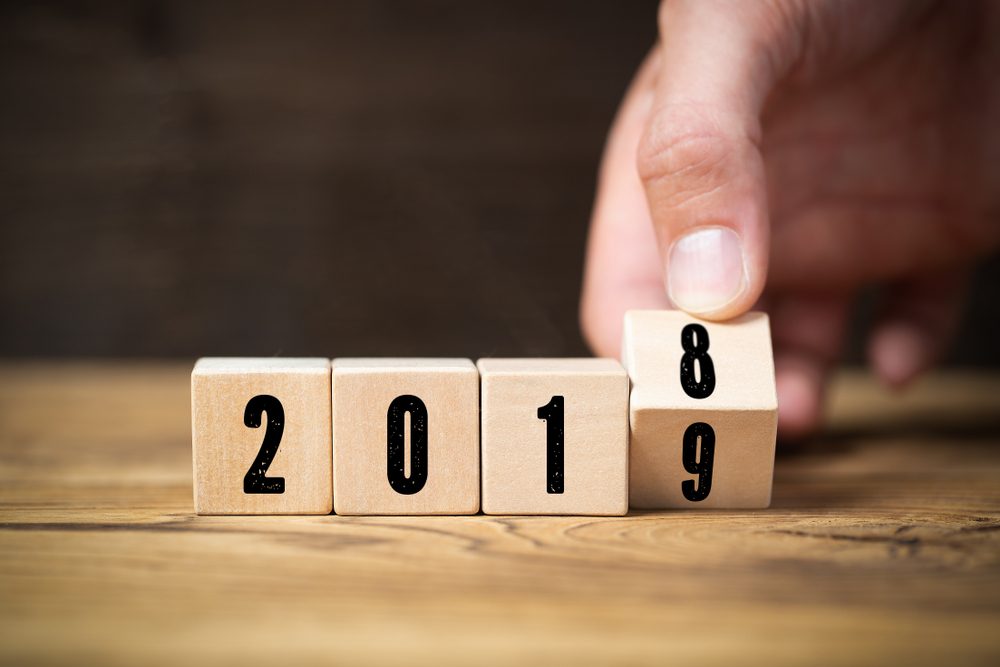 Given that many of us have only just returned to work following the Christmas break, we thought it might be an idea to write an update regarding some of the things to consider throughout 2019. Of course, everything is subject to change, especially because we are in uncertain times that appear to be moving in different directions from one day to the next, but it can’t harm to outline what we consider to be some key themes at the time of writing.

In the last week of trading in 2018, we saw equity volatility hit extreme levels. While this instability could easily be the result of a combination of large orders for the end of the year and very poor liquidity as market makers were on holiday, it could also be the beginning of a destabilisation of markets and possibly a turn in the dollar. At the final Federal Open Market Committee meeting of last year, the Federal Reserve hiked rates as expected. Of more interest was the accompanying statement, which appeared to suggest the central bank is now on ‘data watch’. US economic data releases will have to repeatedly surpass expectations for the Fed to increase rates in 2019. It is interesting to note that Goldman Sachs has changed its forecasts for the US rate curve from three hikes in 2019 to just one.

The FOMC also came under fierce criticism from Trump, who Tweeted that ‘the only problem the economy has is the Fed’. There was also talk that the former reality TV star was considering firing Fed Chair Jerome Powell, which added to the feeling of fear in the US stock markets. Powell temporarily calmed things down by saying that he and his colleagues will be keeping one eye on data and listening to the markets, but poor figures from Apple have been followed up by weak releases from Samsung and LG, suggesting the Chinese economic slowdown is impacting businesses globally.

Recent data shows that the Chinese economy is beginning to struggle. Events surrounding the arrest of the CFO of Huawei and the possibility that the US will impose sanctions against the company in early 2019 shows just how delicately balanced the situation between the two largest economies in the world is.

The fact is, it is in both country’s interests to secure a trade deal. Trump has shown himself to be prone to bullying tactics to get his way (the government shutdown helps reinforce this), with some degree of success. However, China is in a stronger position than most and less likely to bow down to Trump’s demands; the Belt and Road Initiative – a state-backed campaign for global dominance – remains the primary focus and nothing more than a slight and temporary interference will be tolerated.

By far, the biggest risk is that Trump decides to play hardball, stands his ground and continues to make aggressive moves. We feel there is a limit to how much China will allow, so if Trump does go this way, the risk of an escalation in the trade war is far greater than it would otherwise be. If tensions are ratcheted up, this will be bad for the US, China and the global economy.

Has the US economy had its day?

In addition to the trade war with China, the US has several challenges closer to home this year. The economic effects of Trump’s policies have almost run their course and now that stock markets and the dollar are at very high levels, we could see growth begin to wane. As we have stated above, the Fed seems to be of the opinion that policy has been tightened enough for now, which could negatively impact the value of the dollar throughout this year.

Then there is the fact that Trump has to contend with trying to get policies through Congress which he no longer controls. Of course, he still controls the Senate and so any possibility of him being impeached is remote, but if proceedings were brought, they would distract and destabilise the Trump administration and markets.

GDP growth forecasts have been lowered across the globe and the US is no exception. The growth rate in the third quarter of 2018 was 3.4% – some way below the previous quarter’s 4.2% – and the outlook is lower still. The main question surrounding the US economy is whether 2018 was as good as it gets? If we cast our minds back to 2017, the eurozone enjoyed a fine year before sliding throughout last year. Could 2019 be the year that the US economy slides following 2018’s successes? 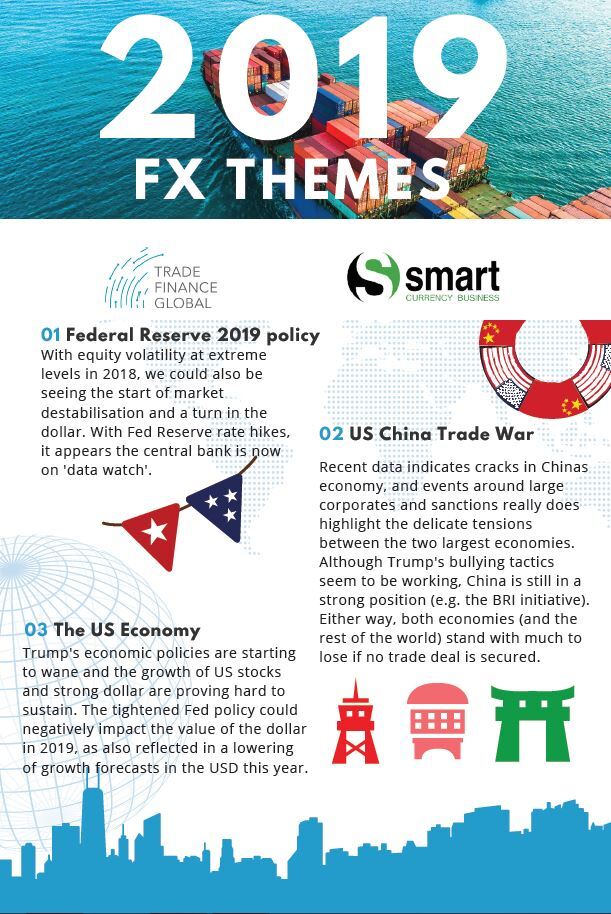 Will the eurozone continue to struggle?

With attention trained on Trump and Brexit, Europe begins the year flying under the radar a little. The economy has been struggling for some time now, most notably in Germany, which has for so long been the engine for growth in the eurozone. Unemployment is generally falling, but this is yet to have a significant impact on wage growth. The Italian government has finally agreed its budget with the European Commission, but that isn’t to say the situation is totally resolved; while Italy was forced to rein in its budget deficit for this year, Emmanuel Macron was permitted to increase France’s to appease protestors. Such apparent hypocrisy could fuel anti-EU sentiment in Italy and beyond.

Fresh elections in Italy could see Salvini and the Northern League securing an outright majority, which would be a far more serious threat to Italy’s EU membership than the current government. In May, we have the European parliament election, which could lead to an increased shift towards populism and a move away Brussels. Against this backdrop, the slowing eurozone economy could grind to a halt.

The European Central Bank joined many other central banks when it downgraded its growth forecasts. It is still entirely possible that Mario Draghi will get through his tenure as ECB President without ever increasing interest rates. Angela Merkel will step down as head of her party, although she wants to stay on as German Chancellor until 2021. Both Merkel and Draghi have been cornerstones of European stability and while we do not foresee a lot of downside for the euro when they depart, the upside might be much tougher going than many currently imagine.

The UK and Brexit

It is remarkable that with 80 days to go until the UK is set to leave the EU, nobody is sure what form, if any, Brexit will take. Irrespective of your personal political leanings, it is difficult to not feel slightly embarrassed by the shambles the UK has made of withdrawing. The Department of Transport has recently performed a no-deal Brexit rehearsal, which featured a trial of an emergency traffic system which is designed to cope with 6,000 vehicles. Two questions: why leave it until this late to conduct such a rehearsal? Why use 87 trucks for the rehearsal when the results cannot possibly be seen as indicative of what is likely to happen in the event of a no-deal? The DoT has also announced they will spend more than £100 million on easing congestion in the event of a no-deal Brexit due to ‘unforeseen events’ which most of us have seen coming for more than a year. The fact that almost all of the money will be going to French and Danish companies is an irony too far.

A no-deal Brexit is still more likely than it should be and while there is an apparent consensus in Parliament that exiting without a deal is unacceptable, nobody can agree on what deal we should try to strike with our European counterparts. We hope that an agreement can be reached and that it will be approved by EU leaders, but time is running out. Indeed, to hope for this eventuality almost certainly requires hope that their will be an extension of the 29 March deadline. Still, it would at least give UK companies something to plan against, as well as providing them with more time to put measures in place.

We still believe that in the event of a hard Brexit, the consequences will be catastrophic. While we appreciate that the MPC forecasts were based on a ‘worst-case scenario’, we do not feel that the risks were exaggerated. The issues created by a hard Brexit will require action that is quick and decisive – two adjectives you would hardly use to describe the current government.

In all the noise surrounding Brexit, not enough has been made regarding the fact that trade deals take an extremely long time to put in place. As well as agreeing new terms with the eurozone, there is the need to strike deals with countries around the world. These countries will be aware that they have the upper hand and could well drive a hard bargain, especially if we exit without a deal. The WTO option that many people are talking about does not take the inherent complexity into account. Then there is the threatened withdrawal of the US, which could well render WTO impotent.

Sterling would almost certainly plummet against a basket of currencies, thereby creating another spike in inflation and making life incredibly difficult for importers. It is even possible that the Bank of England would have to hike rates to protect the pound – at a time when debt levels are rising and households are struggling. This is not what we want to happen, but it could happen. If it does, we would arguably face the most challenging period in our history since the early 1970s.

Which, somewhat ironically, is around the time the UK joined the EU in the first place. 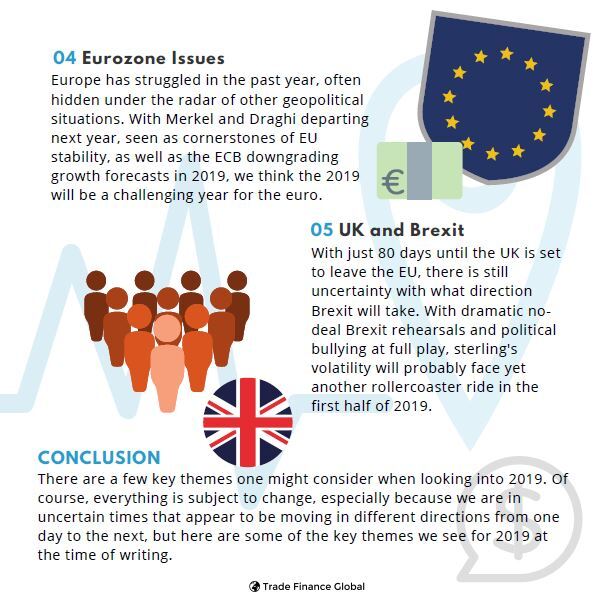