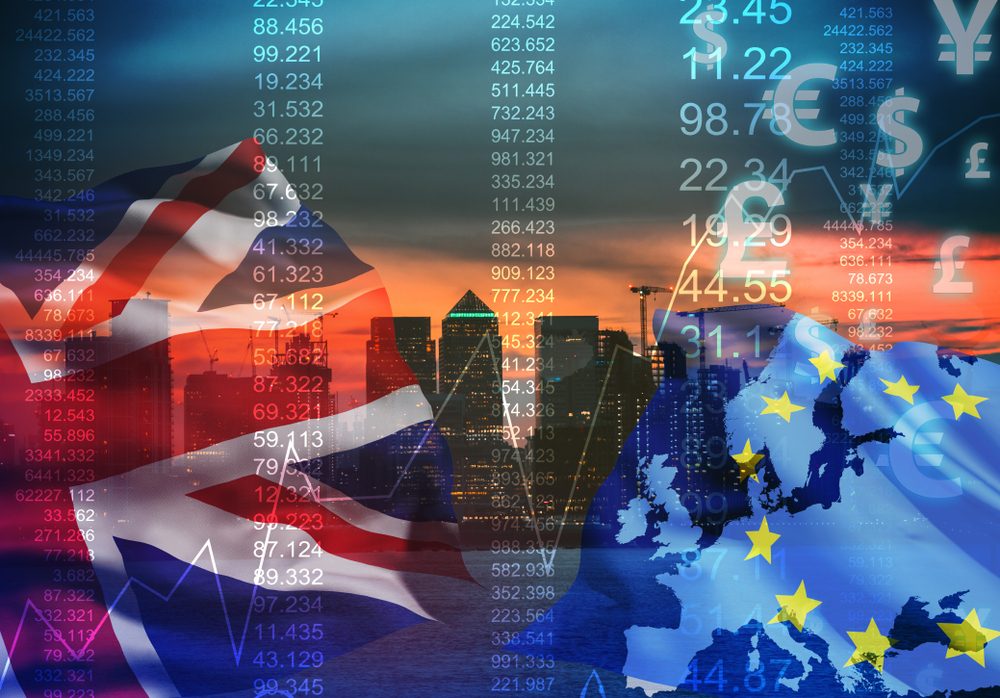 The political and economic uncertainty that has become a symptom of the Brexit negotiations could significantly impact UK businesses. Here, we outline our position and what to consider when planning for Brexit.

Back in early June 2016, very few people believed the UK would vote to leave the European Union. Still, even among those who doubted the Great British public would choose to go it alone, there were some who felt it prudent to hedge against such a specific and potentially sizeably risky event.

And how right they were! Take the chart below for example. It shows sterling’s value against the dollar in the run-up to the referendum and the moves in the months afterwards. As you can see, the pound jumped just before the result of the referendum, as investors believed the remain camp would emerge victorious. It wasn’t to be and sterling plummeted by more than 13% in the aftermath of the result. 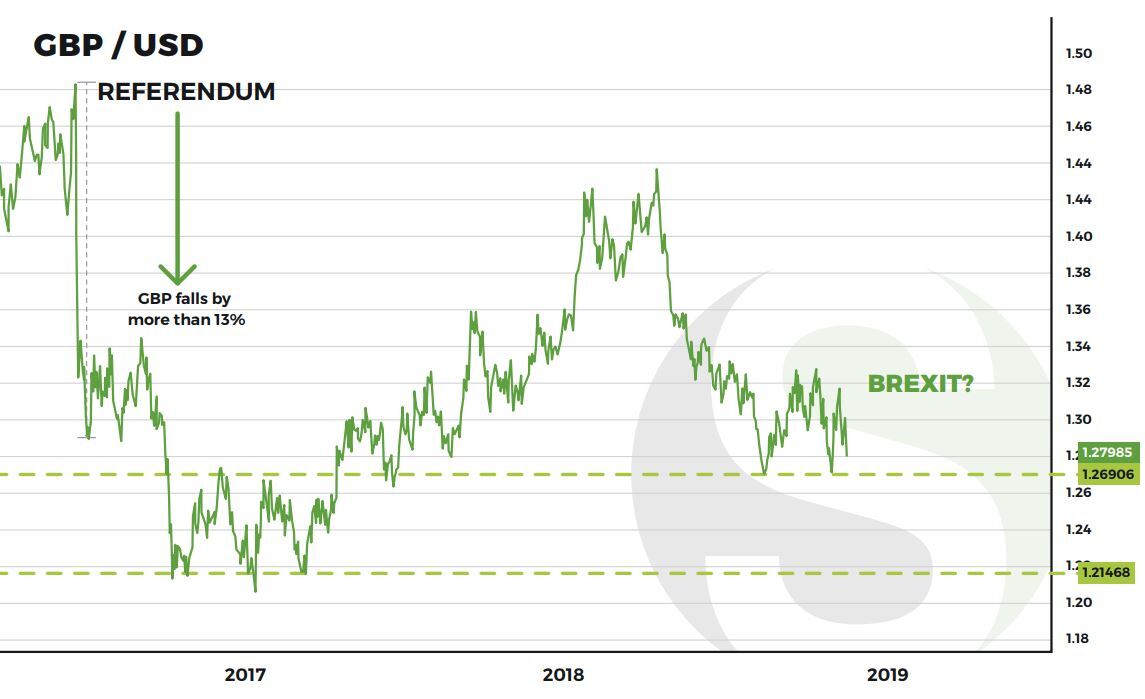 On 11 October 2016, the pound fell below $1.21 which equated to a 5% loss in its value against the dollar in four days and 18% since the Brexit vote. The selloff on that day was triggered by fresh concerns over the effects of a hard Brexit, when leaked Treasury papers suggested leaving the single market would ultimately cost £66 billion in lost tax receipts.

Over the next 18 months, sterling experienced a bit of a rollercoaster ride, although there was a general upward trend, with it climbing above $1.43 on 16 April 2018. Around that time, the Bank of England was widely expected to hike interest rates and technical meetings between UK and EU negotiators began in Brussels. One month later, the pound was worth around 9 cents less and it has been sliding ever since. Occasional rays of Brexit light cause some strengthening before a lack of actual detail sends it weakening again.

Hindsight is often a wonderful thing and those that chose to put risk management strategies in place before the EU referendum were certainly happy they did.

So, as we approach another date-specific risk, how should people be preparing for Brexit?

The risks are not balanced

In recent months, there has been much frustration from companies and investors alike concerning the lack of progress – and information – from the UK government about how best to manage the Brexit process. Even now, there is very little insight into what the details of a final deal might look like and, with no guidance from our leaders on how to prepare for a no-deal scenario, it is difficult to know exactly what the best course of action is.

However, we are in agreement with Standard and Poors, who say that a no-deal Brexit would likely lead to a prolonged period of lower growth and possibly even recession for the UK economy. In that eventuality, it is more-or-less certain that we will see sterling move lower than the current levels.

One could be forgiven for thinking that if we manage to secure a Brexit deal, then sterling will strengthen and if we don’t it will weaken. We see the reality as being quite different to that. Similarly to the EU referendum, we do not believe the risks are as balanced, or symmetrical, as that.

The UK is scheduled to leave the EU on 29 March 2019 and there is still so much uncertainty surrounding the terms of our withdrawal. Exchange rates are difficult to predict at the best of times, but against a backdrop of Brexit, Donald Trump, trade wars and increasing geopolitical tensions, it is more or less impossible.

The chart below shows some forecasts from banks around the world. Look how different the predictions are and ask yourself: how might a 21-cent difference in the minimum and maximum GBP/USD rate predictions impact on your company’s profits?

Source: Thomson Reuters as of 9 October 2018

If a good deal is agreed and ratified, there are some things we expect to happen. It makes sense to split these into two categories:

Of those things that will likely happen immediately, we believe there will be minimal disruption to trade, relationships through the supply chain will continue, there will be a provision of financial services to the EU by UK companies, and sterling will experience moderately higher levels.

Of those things that will happen over a longer period of time, we believe there will be a return of investment into British industry, higher consumer confidence, and a sustained sterling rally – once the benefits of a soft Brexit to the economy are realised.

Please note: we do not believe that a Brexit deal will necessarily have a positive impact on productivity in the UK in any way. Evidence shows that productivity has stalled since 2008 when the global financial crisis occurred. The problems with productivity are more deep-rooted and are largely reliant on services in general and financial services in particular. Both provide growth and it is important to bear this in mind irrespective of what sort of deal the UK agrees with the EU.

It strikes us as being faintly ridiculous that the hardest part in getting any deal done at this stage is not whether the UK and EU can agree on a plan, but whether parliament can agree on the best route forward. It is one thing to try and negotiate with the leaders of 27 different members states within the EU, but when there is so much infighting within the UK government and Commons, a difficult task becomes nigh on impossible.

While we are encouraged by stories of progress between the negotiating teams towards a deal they can each present to their constituencies, we think any optimism should be balanced with caution given the high risk that the House of Commons could still reject the terms. Furthermore, we still don’t believe that the government, or British public, have quite understood just how devastating a no deal Brexit could be.

Unlike any scenario with a deal, the effects of a no deal will be immediately severe. For one thing, supply chains would be disrupted, making ongoing business in some sectors either incredibly difficult or impossible. Some of the largest car manufacturers and supermarkets in the UK now use the ‘just-in-time’ model, where stock or parts arrive at the shelves or on the production line direct from their overseas sources.

Sterling would quickly tumble and would be unlikely to recover for some time. It could even continue to fall in the months ahead depending on how quickly UK businesses react to the situation. Business investment and confidence would both drop even further, and we think it entirely possible that the UK economy could slip back into recession.

Any weakness likely to be more pronounced

New trade deals will be critical to offset the disruption but they will take years to negotiate. This isn’t as straightforward as hard Brexiters would have you believe. You can’t sit down for five minutes, thrash out a deal, and start trading. It is infinitely more complex than that and, while we don’t pretend to understand all of the intricacies, we know that it is far more difficult than some people are suggesting.

While the world economy has become digitised and globalised in the last 15 years, there is strong evidence to suggest that physical trade is much easier with countries that are closest to you. It is no coincidence that the US trade as much as they do with Canada and Mexico, of that Australia has such a strong trade relationship with China.

Therefore, not only would there be a time lag before new trade deals can be agreed, we have doubts any deals would be able to compensate for the losses from EU partners. To give you an idea of how important physical proximity is to trade, consider that the UK exports more to Italy than it does to China and imports more from Holland than it does from China.

All things considered, the chances are probably balanced on whether sterling will go up or down. However, it is still more likely that any weakening in sterling would be more pronounced than any strengthening, just like the referendum. Ultimately, this should be good for sterling buyers, but not so good for sterling sellers. But that rather misses the point – the downside risks are greater, but the reality is that nobody can be certain how the next few months will play out.

In addition to all of the above, there are plenty of other potential hurdles that the UK might have to overcome. Even if Parliament ends up agreeing a deal – and that is a pretty big if at the minute – the agreement must be sent to the capitals of the other 27 EU member states so that they can pore over the details line-by-line. That will take some time, especially given that there are several legal issues to overcome relating to the terms on which any temporary UK customs union with the EU could be brought to an end.

If a deal is not agreed in the next couple of weeks, then the next opportunity will come in mid-December. A regular EU summit is scheduled for this time which is why the UK government is keen to get an agreement approved by Parliament before Christmas. However, at present, that is easier said than done.

The European Parliament has already signalled it would need six to eight weeks to complete to ratification process. The current plan is to vote on the issue in the middle of March which would be a couple of weeks before the UK is scheduled to leave. This could go to the wire and if it does, there would be no time for UK businesses to put plans in place.

The time to act is now.